The NDC operated under a very strict but secret mandate of creating a modern Utopian city worthy of being a nation’s capital under a working codename “Dreamtown”. The NDC modelled its capital plans for Dreamtown after the successful design of Brasilia, the modernist federal capital of Brazil built in 1960.

Regions of Ottawa and Gatineau were designated for political and administrative activities using structures of oversized scales, broad vistas and heights, producing the idea of Monumentality. Plans were underway to create various “axis” of function, such as the The Residential Axis for local commerce, schooling, recreation and churches. 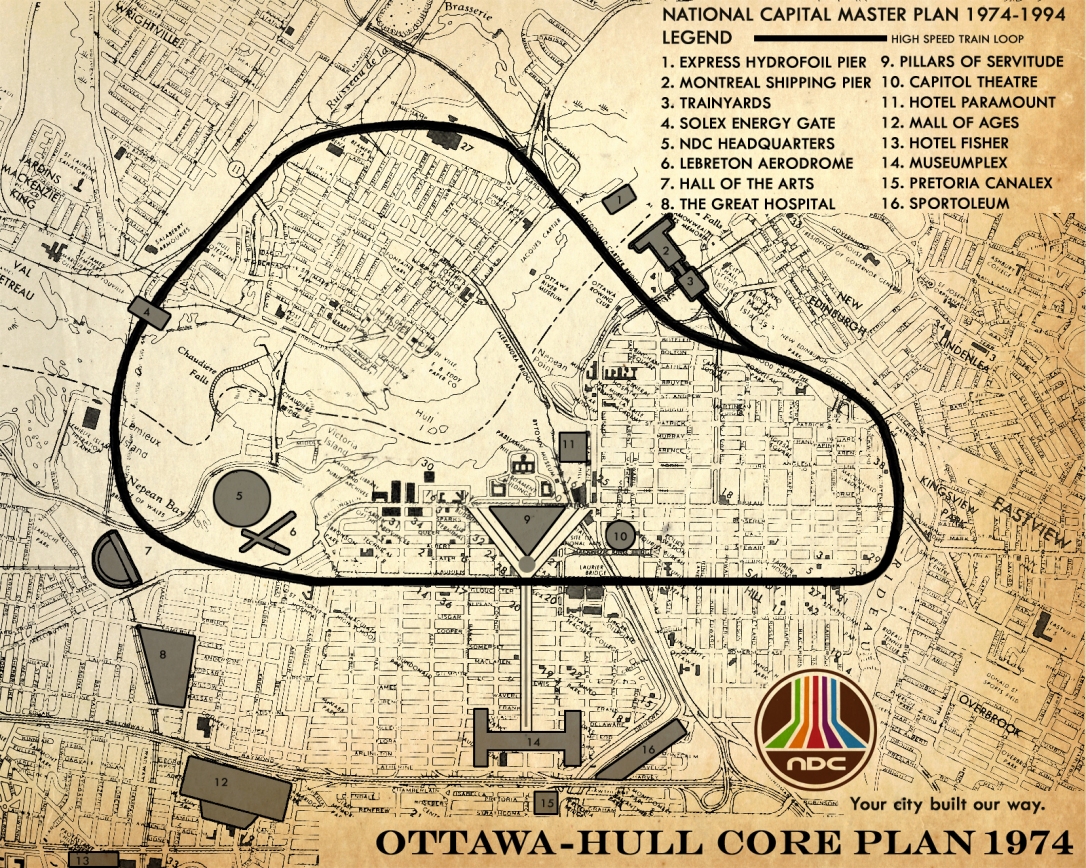 One of the main objectives of the never realized NDC plan was to allow the free flow of automobile traffic, and public transit in and around a modernist city utilizing the latest in 1970s architectural and technological advancements. Complete neighbourhoods and buildings were designed entirely by computers using input of  various variables to create the “perfectly computer designed city possible”.

In addition to the various other “sectors” or “axis”, The Financial Sector and Hospitality Sector would include amusement centres with theatres, cinemas and restaurants. The NDC worked on a grand plan in its operations centre located on Leitrim Road where the classified plans for the region.
The NDC required massive federal funding for Project Dreamtown but this would hinder the NDC’s overall objective, and in 1979 after only five years of operating, the NDC, Dreamtown, and the entire project were disbanded to be replaced by the currently operating NCC.
Come explore the pages within and discover the greatest city that never was….DREAMTOWN.

Bring a part of the lost DREAMTOWN initiative into your life with one of these handsome gift shop items. Please email your section choice for a total cost and shipping quote.

In 1974 the federally funded NDC embarked on an immense strategic initiative to re-develop the entire national capital region of Ottawa-Gatineau under the classified codename “PROJECT DREAMTOWN”.* COME EXPERIENCE THE GREATEST CITY THAT NEVER WAS…     *This is a fictional account of an incredible, but unrealized program. It is documented here for your enjoyment… END_OF_DOCUMENT_TOKEN_TO_BE_REPLACED